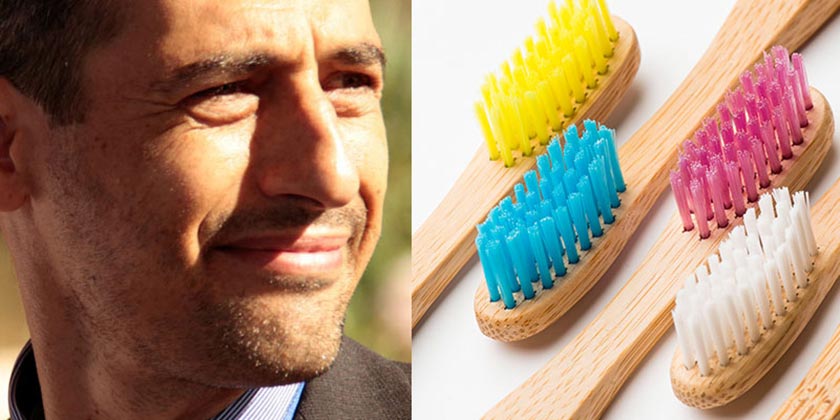 DR DARREN Weiss was born in Australia but now lives in Ein-Kerem, Jerusalem, Israel. He moved to Israel because, he said, he loves the people and the country. He is evidently a man driven by his heart, a fact that has shaped his life.

He trained as a dental surgeon at the University of Melbourne, and first practiced in Melbourne for a couple of years before making his move to Israel. He was in practice for 22 years until four years ago when he decided to dedicate himself to oral health promotion, which means he consults for organizations, corporations and start-ups in the global oral health community.

We asked what inspired him to create his original oral care initiative, and how did he subsequently become involved with the Humble Smile Foundation?
He said, “The inspiration came from an awareness that while I'm working as a dentist who values prevention as the highest form of care a dentist can offer patients, there are a vast number of people suffering from oral disease − primarily due to dietary transition – without the most basic preventive means, such as a toothbrush, toothpaste or even access to dentistry for relief.
“The greatest impact for preventive efforts will be where the unmet needs are greatest − and that's where I wanted to be as a dentist.”

Together with academic partners Dr Weiss had developed a preventive oral health outreach program aimed at children in the most vulnerable communities around the world. These were usually remote and disadvantaged villagers. The program was called Planet Smile.
He explained, “I was looking for sponsors when I met eco-aware, bamboo toothbrush manufacturer, Humble Brush, who was looking for the best way to deliver its commitment that for every one of its brushes sold it will donate another brush − or the equivalent in oral care – to a child in need. Our ideas fitted together as perfectly as a puzzle, and we formed the Humble Smile Foundation just five months ago. We now have an independent, honorary, non-remunerated Board of Directors made up of young dental professionals − dentists, dental hygienist, and dental student activist − dedicated to our mission.”

We then asked whether his charity primarily works to provide oral care and preventive oral health education for children. He replied, “Not exactly. Firstly, I wouldn't call it a charity because we don't rely on donations. We are sustained by the innovative business model I mentioned before, whereby we administer the funds we receive from our sponsor, Humble Brush.
“We do this by providing preventive oral care to underprivileged children. Our work is based primarily on implementing behaviour/lifestyle changes in schoolchildren’s daily routine. These mainly include oral hygiene interventions such as monitored toothbrushing and dietary adjustments. Oral health education does play a part − especially in training-the-trainers for sustainability.”

When asked whether the Foundation would help adults if the opportunity arose, Dr Weiss explained, “Schools in developing countries are often community centres in many senses. One of the secondary impacts of our work is sensitizing members of the schoolchildren’s families to the idea of taking personal responsibility for changing habits for oral health.
“Some of our partners are organizations that provide dental treatment and we actually complement their work very nicely. When a dentist is present on-site, we have the equipment and capability to provide emergency dental treatment whenever we encounter the need.”

Dr Weiss outlined the future for the Humble Brush Foundation. He said, “We are working with international dental student associations and dental school faculties on making our platforms available to student volunteers. Ultimately, I think a couple of weeks as a field intern on the ‘front lines of preventive dentistry’ could serve to provide dental students with a well-rounded education. We are also working together with a partner, Firsthand Technologies, on making a powerful interactive oral health education interface customized to the kids for each region of need.
“Another thing we are working on with a partner is about providing clean water − bundled together with hand-washing hygiene – which will enable us to go to places so remote that they don't have a reliable water supply.”

He explained that being preventive is about being humble. He said, “Why is the preventive approach the most humble approach? Because the preventive approach recognizes that no form of treatment is as good as prevention. No restorative treatment is as good as the original tooth. For example: amalgam fillings can lead to enamel fractures, composites to micro-leakage; root canal treatments to infected lateral canals and implants are rigid. As for dentures… seriously?

“Fluoridated water supplies, fissure sealants... all these preventive interventions are always going to have the best cost to benefit ratio compared to curative treatment. I developed my preventive mind-set into a practice philosophy. I was lecturing to dentists not to fear prevention and about how a preventive spirit can actually grow a practice. Everything we do as dentists should be preventive, and there is lots we can do, fillings to prevent spread of caries, root-canal to prevent infection, implants to preserve facial structure and function… the list goes on. But what is the value of prevention if you take cure right out of the equation? What do you think? Prevention becomes infinitely more valuable. An abscessed tooth, or for that matter a cavity, is a whole different matter for a person who has no option for treatment, than it is for a person who has access to dentistry. For one it’s the inconvenience of a dental visit; for the other it means pain, morbidity, chronic suffering, social and occupational limitations and it can even be life-threatening.”

Dr Weiss pointed out that dental caries is the most prevalent childhood disease, affecting more than 70% of schoolchildren worldwide. If a child is in pain, he or she cannot go to school. A global survey by an international team of scientists analysing studies involving some 4.7m people between 1990 and 2010, suggests 621m children have untreated decay in milk teeth. Their work predicts more than 190m new cases of dental decay every year.

In The Gambia, 86% of five-year olds have tooth decay with an average of 4.25 teeth affected. 50% of kids use a chewing stick to clean their teeth while the other half don't clean at all. The Foundation will be there in March.
In Cambodia 93% of six-year old children have tooth decay with an average of nine teeth afflicted. 60% of mothers indicated that their child had suffered from dental pain in the past six months.

“Caries is rising in developing countries and dropping in developed countries,” said Dr Weiss. “Why is this? What's going on? The fact is dental caries is a lifestyle related disease. In some developing countries there has been a great change in dietary habits where traditional foods and beverages have been replaced with cheap imported ones containing higher levels of sucrose and carbohydrates. In others the transition to the western form of diets is also due to vigorous campaigning by junk food manufacturers that flood the market targeted to vulnerable groups such as children. Undoubtedly sugar consumption is a major factor in children’s oral condition in Mexico.

“By the way, the UK consumes less sugar per person than Mexico but still about twice as much as the amount recommended by the World Health Organisation – 18kg per year.”

He continues, “Although there are more than a million practicing dentists worldwide, their unequal geographic distribution results in an over-supply in some wealthy urban areas, which starkly contrasts with a critical shortage in many of the world’s poorer and remote areas. Globally, roughly only 60% of the population worldwide enjoys access to proper oral healthcare. Many countries in Africa, Asia and Latin-America have a shortage of oral health personnel and by and large the capacity of the systems is limited to pain relief or emergency care. In Africa, the dentist to population ratio is approximately 1:150000 against about 1:2000 in most industrialized countries.

Dr Weiss then explained that in India, due to the size of the population, the treatment needs for dental caries is enormous and impractical to meet. The total budget allocation for health is meagre and for oral health it is only a fraction of the total health budget.

He said, “There is as yet no oral health policy adopted by the government of India. Some of the children we will be seeing in the urban slums of Mumbai in October this year are not even registered. There is no policy for systemic use of fluoride. For most people, toothpaste and toothbrushes are not affordable because they are categorised as cosmetic products and hence levied higher tax.

“So, they don't have fluoride, they can't afford preventive measures, they don't have dentistry, they don’t have policies, but they do have a sweet diet! So what about preventive initiatives? Almost non-existent. Studies have shown that oral health education, which is carried out by various organisations, has not had any significant impact. What's needed is actual behavioural change.

“I'll give you some examples where it has worked: Fit for School program in the Philippines. Schoolchildren create their own personalized tooth brushing station where they brush with fluoride toothpaste as part of their daily time-table. +Fluoride program in The Gambia where fluoridated salt is used by the school cooks in preparing kids' lunches. These are great, effective programs that may well help inspire our own outreach efforts.

“The Foundation’s program is based on need and not any sponsor's interest, and leverages humanitarian aid platforms already in place to maximize efficiency and reach. Schools are targeted because interventions can be integrated efficiently into school curriculum, early onset of oral disease is reversible and healthy behaviours and lifestyle developed at a young age are more sustainable throughout life.”

He concluded, “Implementation requires a degree of creativity to overcome challenges that arise due to cultural and political issues. We will need to monitor the outcomes, efficacy and impact of our interventions as part of our planning, implementation and evaluation cycle, as well as our contribution to the global pool of knowledge. We also need our sponsors to grow in order to sustain and to expand our reach. Did you notice that the regions with the high unmet needs that we discussed all fall between the tropics, along the equator? This is also known as the Bean Belt, because coffee and cocoa beans are grown there. Well, I came up with a program which I call ‘Beans to Brushes’. The idea is to offer coffee and chocolate corporations the opportunity to buy Humble Brush bamboo biodegradable toothbrushes and get brand equity on a project of ours as a corporate social responsibility initiative.
“At the same time, consumers are being given the opportunity to connect with and help the producers at the beginning of the chain improve their lives. You can see this is quite a different approach to the traditional linear/individual view of tooth brushing – it's more circular and communal – which is perhaps quite relevant to a globalizing world.”